Hey there, HSM coming at you with another review. This time its WWE Unforgiven, which took place on September 21st 2003 live from Hershey PA. This RAW brand PPV featured 8 matches with the main event being Triple H vs. Goldberg for the World Heavyweight Championship. Also at stake on the card were the Tag Team Titles, the Intercontinental title, the future of Stacy Keibler and of course the future of the RAW announce team. How does this PPV shape up? Read on to find out. 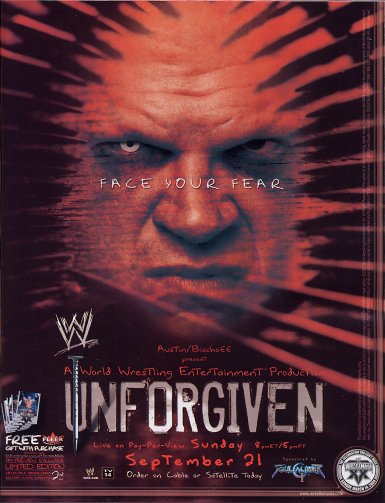 The first match is the tables match for the World Tag Team Titles and was originally supposed to just be a run of the mill six-man tables match but during Heat Eric Bischoff announce that due to injuries suffered at the hands of La Resistance, Spike Dudley was unable to compete therefore making it a handicap match. Stone Cold Steve Austin then countered by making the match for the Tag Titles. Which gave us a 2 on 3 Tables match for the belts.

Now personally I liked La Resistance at the time of this match. I know most people said that they were too green to be given the titles so soon but I found them entertaining. As for The Dudley’s however, I think there act has been stale for a long time, but they have already shown that they cant really cut it as singles competitors so the WWE has no choice but to keep them together I suppose. I also find the Tables match gimmick incredibly stale now also so as you can see I wasn’t really looking forward to this match. That being said I must admit this isn’t a bad match at all. The addition of Rob Conway to La Resistance really helped to make this a good match as he is a very solid wrestler and as stale as the Dudley’s are they are still entertaining to a degree.

The first to go through a table is D Von Dudley after he was Irish whipped into a table set up in the corner. He is closely followed by Sylvain Grenier who is suplexed through a table set up in the middle of the ring. It should also be added that at the time of this match Grenier was suffering from a painful neck injury and as such, only played a limited role in this match. In fact at time of writing this review some 4 months after the PPV Grenier still hasn’t been seen on TV since this match. Rob Conway is next through a table after being thrown outside the ring only to find a table breaking his fall. The match finishes when Renee Dupre is given a 3-D through a table to give the Dudley’s there seventeenth reign as Tag Team Champions. This match is relatively short which is frankly a good thing due to the fact that we have seen the format too many times before.

Next up is Scott Steiner vs. Test. The focus of this feud has been around the managerial services of Stacy Keibler. If Scott Steiner won this match then he would regain Stacy’s managerial services, which he lost in a match with Test a few weeks before. If Test won however, not only would he keep Stacy but he would also gain Scott Steiner’s services (whatever they might be). This was not a good match. The two seem to have little or no chemistry together and it is a mystery to me why this feud lasted as long as it did. Steiner is a shadow of his former self due to injuries and Test is…well he’s just Test. The match is fairly uneventful and comes to an end when Stacy attempts to use a chair on Test but misses and instead hits Steiner. Test then quickly follows up with the big boot and the pin to end the match.

The next match was billed as Legend vs. Legend killer and featured Randy Orton going up against The Heartbreak Kid Shawn Micheals. This match came about after Randy Orton interfered in the Shawn Micheals/Ric Flair match at Badd Blood costing Micheals the victory. Now as you would expect from most matches involving HBK this match is actually pretty good. Add the fact that Orton was accompanied to ringside by Ric Flair then not only do you have entertainment in the ring but you also have the highly animated Flair on the outside. The match starts slowly with some nice wrestling holds exchanged and gradually builds into a great match. Orton spends a large portion of the match working on HBK’s arm after Flair threw him into a ring post on the outside while the ref’s back was turned. Suffice to say however HBK makes a comeback and comes close to putting Orton away. HBK actually hits the sweet chin music and gets the pin but Flair puts Orton’s foot on the ropes causing the ref to restart the match and while the ref is arguing with Flair, Orton uses a pair of Brass knuckles handed to him by Flair on HBK allowing him to get the pin and steal a victory from HBK.

There’s a brief backstage skit next where we see La Resistance licking their wounds after their match. Chris Jericho then enters and complains about Stone Cold abusing his power and stating that he’s the man to do something about it.

This is followed by the women’s tag match where Gail Kim & Molly Holly squared off against Trish Stratus & the returning Lita. This is actually a pretty good match. Molly is probably the most solid female wrestler in the WWE and Trish has improved tremendously over the past 12 months or so. The two heels double-team Trish for a while before she finally gets the hot tag to Lita who quickly cleans house. The end comes when Lita nails the Twist of Fate followed by a Litasault on Molly for the victory.

Shane McMahon vs. Kane in a Last Man Standing match is next. The whole story behind this match is Shane is seeking retribution after Kane tombstoned Shane’s mother Linda on the steel ramp on RAW. This is not a wrestling match in the literal sense of the word; it’s a brutal and barbaric brawl, which includes a huge array of various weapons.

The majority of the match takes place outside of the ring and basically just involves the two beating each other senseless. Although Shane does pull out his usual leap from one side of the ring to another kicking the steel steps into Kane’s face. Both men then head back to the outside and make the way slowly up the aisle beating the hell out of each other as they go. They use anything they can get a hold of including the announce table and a camera boom of all things. Of course this being a Shane McMahon match on PPV you are always guaranteed one thing, a big bump and this match is no exception. After Shane lays out Kane with a TV monitor he proceeds to climb up the staging and leaps from the top, which must have been a good 30 feet. Impressive but predictable. Kane moves out of the way causing Shane to land hard on the stage which of course means he doesn’t get up before the 10 count making Kane the winner. The end of the match of course focuses on Shane’s big bump rather than the fact that Kane actually won but hey he’s a McMahon do you expect anything else?

The Intercontinental match is up next featuring the champion Christian defending against both RVD and Chris Jericho. This match came about after Christian got involved in the number 1 contenders match between RVD and Jericho. Christian laid out both men with the belt so therefore Austin ordered him to defend it against both men in a Triple threat. Now saying that, that match only took place on the previous weeks RAW meaning that this match had barely any build up time at all which made it appear like kind of a last minute rushed decision.

On Heat before the PPV Christian and Jericho were show agreeing to both work together to take out RVD before squaring off each other for the belt and to be fair for a triple threat match this lasted quite a long time. Now considering the three wrestlers involved I was really looking forward to a great match. Now while it wasn’t a bad match for some reason it wasn’t anywhere near as good as I was expecting. Mind you the crowd didn’t help matters, as they were extremely quiet for the whole of this match, which is not surprising after the previous match up. The one memorable high point however was a nice triple powerbomb spot in the corner, which saw Christian Powerbomb RVD with Jericho on RVD’s shoulders. Christian gets the win after RVD attempts a frog splash but Christian brings up his knees and rests the IC title on them causing RVD to land square on top of it. One quick roll up later and Christian has retained his title.

The future of the RAW announce team was at stake next with JR & Jerry Lawler facing off against Al Snow & Coach who were the HEAT announce team. The winners would be the new announce team for RAW. Now as if the prospect of this match wasn’t bad enough try imagining it with no commentary, yes that’s right with JR and Lawler in the ring, nobody filled in at the announce position making an already terrible match worse. There’s no doubt about it that this match was abysmal. Jerry Lawler’s days as a wrestler are long gone and JR and Coach have no wrestling ability whatsoever. A terrible match fought in complete silence, which thankfully didn’t last long and ended when Jericho interfered on behalf of The Coach and Al Snow causing Coach to pick up the win and thus JR and Lawler to lose there jobs on RAW.

Finally we come to the main event. Triple H vs. Goldberg for the World Heavyweight Championship. Stipulation overload in this match. If Triple H got disqualified or counted out then Goldberg would win the title, however, if Goldberg did not win then he had to leave the WWE. We start with quite a long video package charting the history of this feud including how Triple H screwed Goldberg in the Elimination Chamber at SummerSlam. The match itself is by no means a classic; in fact it’s a very slow methodical match. Triple H spends a large part of the match working over Goldberg’s knee but Goldberg overcomes this and manages to bust Triple H open after sending him into the steel steps. Of course we have the now standard ref bump that we seem to get in every Triple H match. Triple H then uses a sledgehammer on Goldberg but Goldberg comes back with a spear and jackhammer for the pin. Evolution.

Overall I found this a pretty average PPV by recent WWE standards. There were a couple of good matches, a couple of bad matches, one truly abysmal match and couple of run of the mill matches. HBK vs. Randy Orton is undoubtedly the pick of the card but this is only an average PPV, nothing more nothing less. Its also disappointing that there are no DVD extras and as such it provides you with little incentive to buy the DVD rather than the VHS version.