Hello folks, its review time once again, and thanks to those really nice people at Silvervision, I have WWE Global Warning Tour on DVD to review. This time it was the Aussie fans that were in for a treat, as the WWE Smackdown superstars packed up their boots, stocked up on sun block, and headed Down Under to give the fans some Live WWE Action. The last Live WWE event Australia played host to was back in 1986, so the Aussie fans were demanding some top notch action, would the Smackdown crew deliver? I’m pretty sure they would, but lets find out. 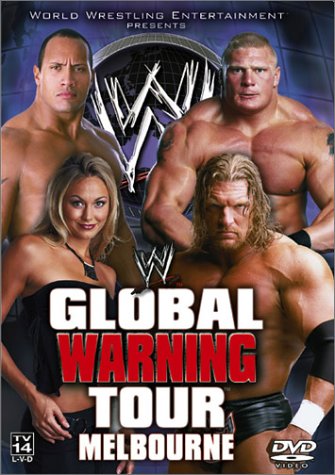 The main event promised to be first rate, with The Rock defending his WWE Championship against Triple H and Brock Lesnar in a Triple Threat match. As the feud between Rock and Brock continued to grow on the road to Summerslam, Triple H was thrown into the mix to stack the odds up against the “Great One”.

Also on the card, the latest RAW defector Chris Jericho, and Smackdown’s shinning star Edge, would compete in a one-on-one singles match, something that should have been excellent, but was it? You’ll have to find out. The card was full with many more great matches, but the match I was most looking forward to was Billy Kidman & Rey vs. Lance Storm and Christian, for the WWE Tag Team Championships. So, all in all the card looked solid, with a promising main event, and a good looking under card, the show should have gave the Aussie fans what they had been waiting nearly 20 years for.

The night was set, with a strong looking line-up and over 50,000 demanding WWE fans, this WWE International Spectacular promised to be something a little special.

To kick us off, Stephanie McMahon the General Manager of Smackdown comes out and introduces Australia to the WWE, she talks about how the WWE have not visited Australia for 18 years, but now their here. Anyway, the first match is Rikishi vs. Rico, in a “Kiss My Ass” match. As you would expect the crowd are wild for Rikishi, and Rico got the usual reception. The match was not a wrestling classic, and to be quite honest it was totally predictable. Anyway, Rico battled through the match with some stiff kicks and a few martial arts moves, but it would be all for nothing, as Rikishi out powered Rico, pinning him after a Samoan Drop. After the match, Rico tried in vain to attack Rikish, but the big man whipped him into the turnbuckle and then delivered a stink face. After the match Rikishi got two children from the crowd and danced with them. For a opening match this was ok, I feel sorry for Rico though, he has huge amounts of talent, but he gets stuck fighting Rikishi is a “Kiss My Ass” match, ok, but not anything special.

Just before the Cruiserweight title match, some footage of Jamie Noble & Nidia surfing is shown. Anyway, moving on, Jamie Noble defends the Cruiserweight Championship against The Hurricane. I always look forward to matches with either of these guys in; they are sold workers and always put on a decent match. This match would surely be no different. The match was not a Cruiserweight classic from the days of WCW, but hell, it was better than the previous match. The match was a mixture off some basic technical wrestling and some highflying cruiserweight action. The crowd were right behind Hurricane, and all over Noble, he is such a good heat machine. Anyway, both men fought in a solid bout, and Hurricane hit a very good neck breaker from the top turnbuckle, however, the ending came when Nidia interfered in the match, and let Noble roll the Superhero up for the 1-2-3. This was a good, solid match and it was entertaining.

Lance Storm, Christian and Kurt Angle visit Melbourne Zoo, and it is pretty funny, as you can expect Kurt makes a slight fool of himself. Tag Team Championship match now, Lance Storm and Christian defend the belts against Rey and Billy Kidman. Storm and Christian came out to great heel heat, and Billy and Rey got two of the biggest pops of the night. I was looking forward to this match, and I was impressed, not only did all four men give it their all, it was totally entertaining. With a mixture of high-flying wrestling from Rey & Billy, and some good solid technical wrestling from Storm and Christian. Storm and Christian worked the crowd very well and they had massive amounts of heel heat. I thought this match was probably one of the better bouts of the evening. The ending game when Christian had the referee distracted and Storm nailed Kidman with a tag team title belt. Overall, top notch stuff.

Moving on, we see Torrie Wilson, Billy Kidman and Edge shopping, nothing really worth watching here. Moving on to the next match, Edge vs. Chris Jericho, Smackdown vs. RAW. Chris Jericho got a good pop, but that’s probably because he was the first main event star on the show. The crowd soon changed their opinion of Jericho as he came closer to the ring, and the Aussie fans started to chant and call Jericho “w**ker”. Edge came to the ring, in what was one of the biggest pops of the night, the crowd where truly wild for him. Jericho grabbed the mic, and started slagging off the crowd in only a way he could do. Really good pre-match promo from Jericho. The match was what you would expect from these two, it was entertaining and both men seemed to work very well together. The match was fast paced with lots of near falls; it had me on the edge of my seat a few times. The ending of the match came when Jericho put the Walls of Jericho onto Edge, but he managed to reverse the move into a small package for the victory. I’m not a great fan of Edge or Jericho, however, I’d take my hat off to them, if I was wearing one, the match was truly first rate. The crowd loved it, I loved it and it was certainly the match of the night, well done.

Moving from the best match, to the worst. Torrie vs. Stacey, Ok, I’ll be honest with you, I never watched this match, I watched about a minute or so of it, then I fast-forwarded the DVD, it was truly rubbish. Don’t get me wrong, Torrie and Stacey beautiful women, just can’t stand watching them wrestle.

The main event of the night featured The Rock vs. Triple H vs. Brock Lesnar in a no DQ Triple Threat match for the WWE Undisputed Championship. This match had the potential to be one of the best main events outside the US and Canada for many years. Brock Lesnar was the first participant to enter the ring, and he got a good ovation for a heel, as always Paul Heyman accompanied Brock to the ring. Triple H was next to the ring, and he received a huge ovation, even with his current HBK vs. Triple H angle, he still got a babyface ovation. Nobody could beat the reaction The Rock got, it was huge, and the crowd went wild, and all 55,000 plus must have been on their feet. Getting down to the match, Triple H and Rock started off double-teaming Brock with rights and lefts. As the match progressed Triple H seemed to take a step back spending a good part of the time outside of the ring doing a good blade job. Again this match was full of near falls, as Rock, Triple H and Brock all hit their respective finishing moves on one another. Rock went for a Peoples Elbow but Brock kicked out, Triple H hit Brock with the Pedigree and Brock hit Triple H with the F5, it was very hectic. The ending came when Rock managed to hit the Rock Bottom on Brock for the pin. Overall, maybe it was not the best main event us International fans have seen, but it was better than some of the tripe we are served with in the UK. The crowd loved the match, but rightly so, it was the first main event Australia had seen in over 20 years. I liked the match too, it was fast paced, entertaining and would have been well worth the price of admission. It did not live up to my expectations, but maybe I expected too much. After the match there were some shenanigans with Paul Heyman and Triple H and The Rock, but I never really bothered with that, good stuff all round.

For an International show, the WWE excelled their self, this show was great, maybe not in the league of Summerslam 1992, but it was the best for some years. The Smackdown Superstars and crew worked hard and pulled off a great show. Match of the night goes to Chris Jericho and Edge, who put on a great entertaining bout for the WWE fans Down Under. Most of the matches were good, some were rubbish, but the rest were good. Overall it was a first class effort by all. Something that has got me puzzled about this show is that the WWE have failed to include 3 matches that featured on the card. Kurt Angle vs. Test, Billy & Chuck w/Rico vs. Chavo & Hardcore Holly w/Maven, and finally, Randy Orton & Mark Henry vs. Batista & D-Von. Ok, Maybe you would not want to see some of the matches, but the Kurt Angle vs. Test match should have been included, and it is a shame it wasn’t.

If you think about getting the DVD, check the extras out:

The DVD boasts some good extras, mainly the 3 extra matches, which are well worth watching. Spend that little extra on the DVD and you will be pleased, more features, better sound and better quality, however, the VHS will also be well worth buying. As Christmas approaches with a rapid speed, get this at the top of your list, or leave obvious hints lying around the house for your family to see. This will be the perfect addition to any WWE fans Christmas stocking, so get ready to sit back over the Christmas Holidays, grab a turkey sandwich, switch the James Bond film over and watch this very good WWE Event.

The night was set, with a strong looking line-up and over 50,000 demanding WWE fans, this WWE International Spectacular promised to be something a little special.