Its time to review another video from the Video Vault, this time it is one of the greatest WrestleManias of all time, Wrestlemania 6. Over 67000 fans jam packed the Toronto, Ontario Sky Dome for the first WWF Wrestlemania to be held outside the USA, Wrestlemania 6 would be a first for many things. The main event featured, two of the biggest and most popular WWF Superstars of all time. WWF Champion Hulk Hogan would go face to face with WWF IC Champion Ultimate Warrior, and this would be certainly the ‘Ultimate Challenge’. Also the event would feature an inter gender tag team match as Dusty Rhodes & Sapphire would battle against Macho King Randy Savage & Sensational Sherri, and also the PPV would feature Haku & Andre the Giant against Demolition, and much, much more. The PPV would feature many matches 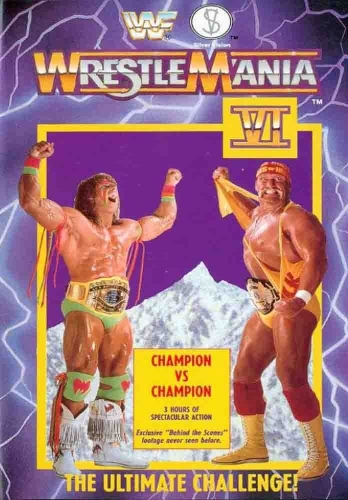 Here is a look at the card:

The PPV was a mixed bag to say the least, none of the matches were at all extraordinary, none really had any decent wrestling in, some were good and some matches were just pathetic. The whole PPV was hyping up the main event, and most matches on the PPV were just filling up the time and space.

This PPV took place in an era when wrestling gimmicks were running wild, whether it was Big Boss Man, Jake ‘The Snake’ Roberts or The Barbarian, this PPV offered gimmicks galore. Some of the wrestlers actually had talent; some just had pathetic gimmicks to offer. Anyway the first match of the PPV was, The Model Rick Martel vs. Koko B. Ware, to be honest this match could have been a lot worse, it was nice and short, with a bit of wrestling, but mainly it got the crowd hyped up, overall a good opening match.

After the match there would be pretty dire interview with Demolition, just before they would face Haku & Andre The Giant. The match was really terrible; this was due to a number of factors. First Andre was not in no shape to wrestle at all, his body was failing him and he was teamed with Haku so he didn’t have to do much work. Secondly Demolition were not a great team, it was no secret that Vince liked ‘big wrestlers’, even if they only had a limited move repertoire, the basic basis of the match was Clothesline, punch, chop, and maybe a powerslam or something like that. The match followed this basis until Demolition got the victory, the crowd were hyped as Demolition won the tag titles, but it wasn’t over, Andre The Giant made a face turn when Bobby ‘The Brain” got in his face. Andre left with a huge ovation, his match may have been terrible, but Andre left the arena as a true legend.

Probably one of the biggest low points in the PPV was Earthquake vs. Hercules. This match was rubbish. Earthquake probably had the most talent, and what does that tell you? Anyways, a few clotheslines and a few stomps around the ring later, the match was over. The match didn’t even pump the crowd up, it was just there, and it was terrible.

Now, Mr Perfect vs. Brutus Beefcake, this match may not have been a technical showcase of skills, but it was quite entertaining. It was a simple slug feast, Mr Perfect showed some good wrestling skills, but he was not able to reach his potential in this match. The match didn’t last for that long, and to the crowds delight Brutus got the victory, even better, he showed us his hair dressing skills by cutting some of the Genius’s hair. Overall it was entertaining and funny.

We are now showed some past footage of the history between Roddy Piper and Bad News Brown. The match begins and Piper and Bad News clash, with right hands to one another. This match was a ‘bar room brawl’ as JR would say, it was a entertaining bout as Piper was a huge face, and he was in true Roddy Piper form as the ‘Hot Rod’ and Bad News fought to a DQ, which went outside the ring as both men fought. This match was a pretty decent outing, again it was only very short but it was good while it lasted.

Now skipping a few matches, we now go to the inter gender tag team match, as Dusty Rhodes and Sapphire would face Macho King Randy Savage and Sherri. Now this match was pretty cool, as the ‘American Dream, ‘The Common Man’ Dusty Rhodes came down to the ring with a great ovation, even more when he introduced ‘The First Lady of Pro Wrestling’ Miss Elizabeth. The match was pretty good, as the polka-dotted team of Sapphire and Rhodes performed as an entertaining team, as did Randy and Sherri. It was not one of the greatest tag teams matches of all time, but it was a whole lot of fun. Overall this was a decent point in a pretty poor PPV.

Again skipping a few matches, the next bout featured possibly two of the most interesting wrestling personas of all time, Jake ‘The Snake’ Roberts  & Ted Dibiase. These two wrestlers are not the most technically gifted to watch, but the character is so good to watch, the in ring presence is tremendous. The pre match interview with Jake was an example of the mysterious characters that he portrayed, very mysterious. The actual match was for the Million Dollar title, which Ted Dibiase held, both grapplers went into the match straight away, the match was a mixed bag, it had wrestling moves in and it had brawling moves in. Looking at this match it just showed what a good heel Dibiase was, and how Jake can play both an affective face and an affective heel, something that many modern day wrestlers can’t do. Getting back to the match it was very even, in the sense that both men are pretty equal in skills and experience. The match was going Jake’s way until Virgil interfered and helped Dibiase win via count-out. Dibiase retained the title, but Jake attacked him and Virgil, then nailed the DDT on Dibiase, and gave some of Dibiase’s money to the crowd. Just as everyone though it was over, Jake got Damien out and chased Dibiase and Virgil to the locker room. This match was great, it was a great example of both men’s wrestling ability and it was thoroughly enjoyable.

As special feature we are treated to a song by a world class artist, this guy is one of the greatest Rock ‘n’ Roll artists of all time, well maybe not, but I’m sure he though he was. Rhythm ‘n’ Blues were performing there brand new song, “Honky, Honky, Honky Love”, until the Bushwhackers interfered and smashed the guitars, this is the only time ever that I was pleased to see the Bushwhackers. An interesting fact, the driver of the pink Cadillac that was driving Rhythm ‘n’ Blues was actually former WCW and current WWE Superstar DDP.

Fast forwarding past some more dire matches, the second last match of the PPV featured Rick Rude vs. Jimmy Snuka. Now this match again was pretty good, Snuka is a world-class wrestler, as was Rude. It was a good match with some good wrestling; this was probably the best match of the night for wrestling moves.

Now the main event, The Ultimate Warrior would go face to face with Hulk Hogan in a title for title match. This was a huge match for the WWF; two of the biggest and popular faces of all time would face each over. The crowd must have been 50/50 behind Warrior and Hogan, half the crowd had the yellow & red Hogan foam hands and the other had the colour face paint of the Warrior. The IC Champion Warrior would put his title on the line, as Hogan would put his World Heavyweight title on the line. The match went from Warrior to Hogan all the way through, the advantage went from one to the other all the way throughout the match. Hogan nearly got the 3 count, then Warrior nearly got the 3 count, and it continued like this until Warrior slammed nailed Hogan with ‘The Big Splash’. Warrior had won the title, and Hogan had been beaten on the biggest stage of all time. The ending of the match was more symbolic than the actual match, as Hogan presented Warrior with the title, and in a way passed the torch down to Warrior. This was the biggest match of its time, it may not have been filled with wrestling technical skill, but it was a huge showcase and it just gave you goose-bumps when watching it, because two of the biggest faces of all time were fighting each other, it was true class.

Personally this PPV is my all time favourite Wrestemania, I can’t really put my figure on why, and it just is. I’ll be honest with you, most of the matches were nothing special, most of the matches were mediocre, some were pretty pathetic, but one or two stand out, mainly Ultimate Warrior vs. Hogan, it was a true spectacle. If you are in to technical wrestling, or Lucha/Puro wrestling then this PPV is not for you, I would strongly avoid it, and however if you are looking for a good piece of WWE/WWF history then I would strongly suggest you get it.