World Wrestling Entertainment along with Silvervision.co.uk is re-releasing WWE Unforgiven 1998 on DVD as part of the ‘Attitude’ Era collection. The PPV defines everything about the ‘Attitude’ Era, With an amazing Inferno match, which featured Kane vs. Undertaker, and Stone Cold Steve Austin defending his WWE World Championship against Dude Love, this PPV had all the hallmarks of a classic PPV, see how it faired? 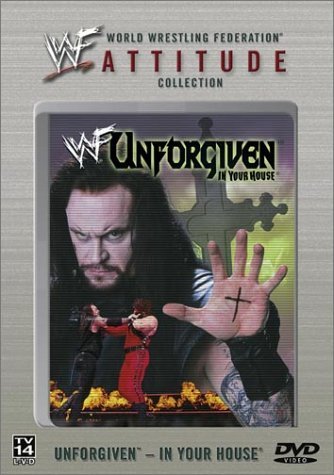 Here is the full list of matches for the PPV:

In the shadow of a spectacular Wrestlemania 14, Unforgiven 1998 had to be good. The ‘Attitude’ era was becoming developed, with Steve Austin in the forefront of this new wrestling phenomenon, the WWE was trying to push the boat out in the continued battle with WCW. The PPV was built around two main matches, Kane vs. Undertaker & Steve Austin vs. Dude Love, with McMahon deeply involved in the Austin match, this PPV would not only be a test of how good a champion Steve Austin was, but also how good a heel McMahon was.

Unforgiven 1998 would mark the first WWE World Title defence on PPV for Steve Austin, as he defended his title against Dude Love. This match was hyped by the WWE as being the night when McMahon would “screw” Steve Austin, just as he did with Bret Hart at the Survivor Series 1997.

Unforgiven 1998 would also be the first PPV in which Triple H would lead D-Generation X, as Triple H would face Owen Hart in a European Championship match, and The New Age Outlaws would face LOD 2000. The PPV would feature many more matches plus a special feature in which Jeff Jarrett would sing in a mini country and western concert, apart from popcorn, what more could you ask for?

The night was set, on paper the PPV card looked good, 3 Championship matches, a Six Tag match, an Inferno match and a live performance by Jeff Jarrett.

The PPV kicked off with the Six-man tag match, The Nation vs. Steve Blackman, Ken Shamrock & Faarooq. This was a typical six-man tag team brawl; it featured some big time brawling with Mark Henry and Faarooq. But on the other had, it had some actually good wrestling with Ken Shamrock, The Rock, D-Lo Brown and Steve Blackman, remember that guy? Steve Blackman? Anyway this match is a prime example of how much heat the Nation had, and particuallly how much heat The Rock had at this time, I can just here the chants now “Rocky sucks, Rocky Sucks”, ah back in the day when all was right with the world.

Getting back to the match, Faarooq scored the pin fall after a dodgy looking power bomb on The Rock, it looked like the Rock nearly landed on the back of his neck, anyway good opening match, but as usual nothing special. Just looking at this PPV you can tell The Rock had outgrown the Nation, and he was on the brink of a highly successful singles career that no one could imagine.

Next Steve Austin comes to ring and surprisingly “Stone Cold is not scheduled to come out here” well according to JR, like hell he wasn’t. Austin gives a pre-match speech about how he will kick the timekeeper’s ass if he screws Austin out of the title.

Owen Hart vs. Triple H for the European Championship is next, and this match would have been really first-class, if it wasn’t for the most pathetic fact that Chyna was suspended above the ring in a steel cage. The match started off quick and the action went outside the ring with Owen Hart taking it too Triple H. Both men returned to the ring and the action picked up a step or two. The wrestling in the ring was actually superb, it was a first class effort by both men. I never really knew that Triple H actually could wrestle, but this PPV proved it, I don’t know what has happened lately, he must have forgot all he has learnt. As the wrestling was getting better in the ring, amazingly Chyna is able to bend the solid steel bars of the cage, yep and there is a flying pig! Then magically she was able to climb down and try and interfere in the match, but was stopped by the referee, as Owen Hart hit a perfect pedigree on Triple H, X-Puke jumped in the ring and nailed Owen Hart with the European title and Triple H got the pin and the victory. This match smells of something, its not crap because the match was good, this match smells of Russo, that’s right, who else would have the pathetic idea of putting Chyna in a cage? Anyway, if you discard the fact that Chyna was there, and if you discard the finish the match was very entertaining.

A bonus match now, NWA Tag Team Championships are up for grabs as Bob Holly & Bart Gunn of the Midnight Express, defend the titles against the Rock ‘n’ Roll Express. With all due respect, Rock ‘n’ Roll express have no place on this PPV. I’m not sure how old The Rock ‘n’ Roll express are, but I reckon they have had a few good conversations with Hulk Hogan in the line for their pensions. Anyway, it’s not the worst tag team match I have seen, but it certainly is not the best match I have seen, and you can certainly tell the crowd felt the same way. If you like to look in the past, then this match is pretty good, and if you like mullet hair cuts, then this match has mullets galore, apart from that its pretty awful.

The first ever evening gown match is next, and Sable and Luna battle it out. This match is even worse then the previous one, it was totally crap. Who in the world would want to see Luna in her bra and panties? Well this was probably one of Russo’s crackpot ideas, can you tell? Anyway, this match was even worse than Ricky Morton’s haircut, so be ready to hit the fast forward button.

Next up Vince McMahon comes out and gives a little promo about him being a native of North Carolina.

My favourite tag team of all time are now in action, not Billy & Chuck, but the Legion of Doom, as they square off against The New Age Outlaws. This was a typical brawl that you can expect from the LOD and New Age Outlaws. The match was ok, but it was slow paced and boring at times. LOD seemed even more slower than usual. I really liked LOD, and the crowd were really into the match, with the “LOD” chants being heard, however LOD were a shade of what they used to be, and personally I think that they were well past their in ring sell by date. The finish of the match occurred when Hawk suplexed Road Dogg with a bridge, but the referee counted Hawk’s shoulders on the mat so The New Age Outlaws scored the victory in a half decent match.

Next something that Jerry Jarrett and his NWA-TNA should think about to get the ratings back up for their wrestling show, as Jeff Jarrett does a special country and western mini-concert, with some US country and western band. If you like country music it might be ok, but I don’t really know much about country and western music so I’m not really in the knowledge to say. Anyway as you can imagine it wasn’t quite as simple as a concert, as Steve Blackman interfered and attacked Jarrett to end the proceeding and save us all our sanity.

It’s the Inferno match now as Undertaker and Kane faced each other in a match where the ring was surrounded by flames of fire. Personally I think this match along with the match Taker & Kane had at Wrestlemania 14, are the two best matches of both men’s career. Both men gave it all, and put 100% effort into the match. The novelty of having the flames at ringside did make it good, but the action in side the ring was good. The wrestling was highly entertaining and the chemistry between both men really works well. Maybe its because I’m a huge “mark”, but I really enjoyed this match, it did steal the show in my opinion. I do think if the match had not have been an Inferno match, it still would have been really good, its just the fire added a little more excitement into the match. Again the crowd were really into this match, especially when Taker dived over the top rope, onto Kane, and the interfering Vader. The ending came when Kane was set on fire after his arm was put into the fire. All in all this match was great in my opinion and I will give it full marks.

McMahon had promised something catastrophic to happen in this match. Steve Austin would defend the WWE Championship against Dude Love, with all eyes on Mr. McMahon at ringside. The feud between Austin and McMahon was really getting developed, and to make matters more interesting Dude Love became involved and he would challenge Austin for the title. Getting down to the actual match it was pretty good. It was a brawl mainly all the way through the match, with Austin taking it to Dude for the first part of the match. Dude Love gained the advantage soon after, and then again Austin got the advantage. McMahon then came down to ring side, and he interfered by distracting Austin. Dude got Austin is an abdominal stretch, and McMahon told the timekeeper to ring the bell, but the timekeeper failed to do so. Dude went for the sweet shin music, but Austin reversed the move, but Dude knocked down the referee. Dude then got Austin in the mandible claw, but Austin broke the hold. Again the match went to the outside, where McMahon got nailed with a steel chair from Austin, and then Austin hit the stunner on Dude Love in the ring for the victory. This match was good; it just failed to develop something catastrophic that McMahon had promised. Considering it was Austin’s first PPV title defence it seemed to be a little disappointing.

This PPV was in the shadow of a good Wrestlemania PPV; it would have been hard to top. Unforgiven 1998 didn’t top Wrestlemania, but it tried. With two great matches in Triple H vs. Owen Hart, and Undertaker vs. Kane the Video/DVD is worth buying anyway. Austin vs. Dude Love was a mediocre match, the rest of the matches were pretty terrible. I’d buy this PPV just because of the Undertaker vs. Kane match, however you can see that match on another VHS/DVD entitled Undertaker: This is My Yard, this PPV overall is ok, but nothing special. If your buying the DVD it will be better quality, but it doesn’t have any extras. If you get bored over the summer holidays this PPV might be nice to buy on VHS or DVD.