WWF The Undertaker – This is My Yard Review 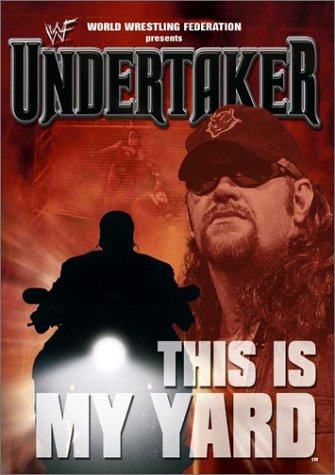 This Video/DVD covers all the different aspects of the Undertakers WWF career, from the first day at WWF Survivor Series 1990, The Ministry and the American Bad Ass gimmick. This is the first Video/DVD, which has the Undertaker commenting on his actions and his personal thoughts of his actions and feelings. With interviews from, Lita, Matt Hardy, Hardcore Holly, Kane, Edge, Chris Jericho, X-Pac and many more WWF superstars, giving their thoughts on the ‘Deadman’. The Video/DVD is spilt up into chapters of the Undertakers Wrestling Career, so this is the best way to review it.

In the Beginning – This chapter is actually the first look at the Undertaker’s Wrestling career, before he joined the WWF. Its shows him in WCW, as part of a Tag Team called ‘The New Sky-Scrapers’. This is the first ever look in a WWF Video/DVD at WCW, and The Undertaker’s run in WCW. In this chapter it show how the Undertaker was a part of a up-and-coming tag team, only to be told that he would never make it big, and never be a big wrestler. Undertaker talks about how he felt, with Paul Heyman and Jim Ross also talking about this part of Undertaker wrestling career.

History Makers – If there is one thing the Undertaker has achieved in his WWF career, it is that he has fought some of the greatest WWF Icon’s of all time. This chapter looks at how Undertaker, 1 year into his WWF career, won the WWF title from Hulk Hogan at Survivor Series 1991. We hear from Undertaker, Jim Ross & Pat Patterson all talking about this chapter in Undertakers career. Then some years down the line, it comes to the Inferno match at Unforgiven 1998. Again with some coverage from Kane, who gives his thoughts on the match, and all the other WWF superstars describe how they felt about that match. This chapter looks at the Hell in a Cell at Bad Blood, The Royal Rumble 1994, with Undertaker rising in the air. Other WWF Superstars describe there favourite Undertaker moment. This chapter would not be complete with out Hell in a Cell 1998; Undertaker describes his thoughts about this match. This chapter looks at all the greatest moments of Undertakers career.

……In Texas – In this chapter it gives us the chance to see the Undertaker in real-life. Undertaker shows us his Motorcycles, and his first motorcycle in which he bought when he ended Hulkamania in 1991. Undertaker describes what it is like having his wife Sara involved in the WWF, and how much he likes her being involved. This chapter basically looks at Undertaker in Texas and how he supposedly lives his life outside the WWF, not a bad look at the Undertaker.

Rivalries – This chapter looks at Undertaker’s rivalries in the WWF with Kane, Kurt Angle and more WWF superstars. It also asks the Undertaker what he thinks of some of his opponents such as HHH, Kane and Kurt Angle. This chapter is pretty good, not the best in the Video/DVD, but its good. It also covers, slightly, the latest Undertaker VS Stone Cold Steve Austin feuds.

My Yard – Until now I have never really took any notice of the term “My Yard”, but this Video/DVD really did open my eyes to the fact that the WWF ring is Undertaker’s ring, because of the fact that he is the longest serving WWF Wrestler on the roster at the moment. This chapter looks at the fact that Undertaker has a lot of backstage influence and Jim Ross, Hardcore Holly and many other people discuss this about the Undertaker, and how he really is ‘The Big Dog, in the Yard’.

So Far – The Undertaker has come under alot of criticism over the past few years, for his action not selling moves, and his locker room leadership. But this Video/DVD does look at the Undertaker as a living Legend, and personally I would agree with that. As you will see in this chapter, many of the WWF superstars agree that he has a lot of respect in the ring, but back stage he has more. What this chapter is saying, is that although one day we won’t see Undertaker on Raw or Smackdown, but he will still be heavily involved with the WWF locker room leadership.

Well after describing each chapter of the Video/DVD, its time for me to give you what I think are the Highs and Lows in this production. Well, this Video/DVD is actually pretty good, apart from the fact that it does not really have any of the Undertakers feuding with Mick Foley; it should have had some interviews with Mick Foley. Also another point that I found very disappointing is that it only showed a little of the Undertaker in the early days, both in WCW and in the WWF. I thought that it should have had more vintage Undertaker.

However, this was a generally good Video/DVD, and it showed a good look into the Undertakers character and his real life persona. My favourite aspect of this production is the superstars thoughts of the Undertaker, I am sure that all the superstars are speaking straight from the heart when they talk about Undertakers locker room leadership.

This Video/DVD also has a good selection of Undertaker moments, from him winning the WWF title at Survivor Series 1991, too the Undertaker facing HHH at Wrestlemania 17.

Ok, as if you have not already guessed I am a big Undertaker fan, and this Video/DVD was great (for an Undertaker fan). However, if you can’t stand the Undertaker then I suppose you won’t even think about getting this Video/DVD, but I would highly recommend it. This should be the first in a series of many new WWF productions showing WWF Superstars before they were in the WWF, stars that were formerly in WCW. The WWF now have the video rights to WCW, so this should hopefully lead to some great up-coming WWF Video/DVDs. I really enjoyed this production, and it is the best release in some time, it’s the closest think to a WWF Shoot interview, as you will find, nice look into the Undertakes life.

This is a good set of DVD Extras with the full matches, if you have the cash and a DVD Player, I would strongly suggest getting the DVD.