WWF – nWo Back in Black Review

By Adam Sibley
Classic WWF Reviews
This page contains affiliate links. At no additional cost to you, we may earn a commission if you click through and make a purchase. Learn more

Thanks to the good people down at Silvervision.co.uk I am reviewing N.W.O Back in Black on DVD this week. This is a part of the long list of new releases that Silvervision are churning out so what makes this one worth the watch compared to the rest? Well sit back and read while I give you the run down on what I think is the best N.W.O compilation ever released. 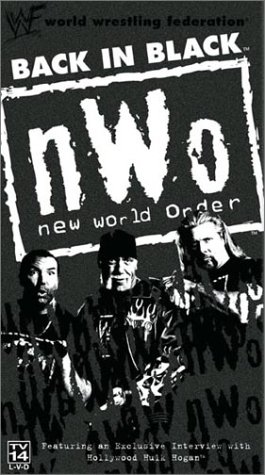 This DVD is the complete finished article as it charts the illustrious members Scott Hall, Kevin Nash and Hollywood Hulk Hogan starting from their time spent in the WWF to their defection to the WCW brand and then how they prolonged the legacy of the infamous three letters in to 2002 whilst in the WWE. The DVD takes you all the way through the journey as it happens and also gives a good insight to those new wrestling fans what was happening in WWE when the N.W.O reached its height in WCW which gives you the whole perspective.

The story starts spotlighting each wrestlers career in the WWE before they jumped ship to WCW. At this time Kevin Nash and Scott Hall were known as Diesel and Razor Ramon which were very different characters to the ones they portray in the N.W.O. Hulk Hogan was already in WCW before the “Outsiders” jumped ship but was still wrestling under his immortal good guy character. So when Hulk joined Nash and Hall at Bash at the Beach 96 it came to a big shock to the world and in a very rare segment the DVD features the entire match and after match interview which lives in infamy.

The thing which keeps the journey gelled together so well and gives you the best insight are the constant views of the N.W.O members. After something is shown or during something is shown they give you their thoughts looking back on everything that happened. Their exclusive words let us know what their thoughts were when everything happened and how they thoughts things were going to go.

The thing that rounds the DVD off well is the coverage of their last run in the WWE. So if you missed any of the action you can relive the entrance at No Way Out, the Ambulance incident on Raw and the Icon vs. Icon battle at Wrestlemania 18. Just before you ask, you can also laugh along with the first promo cut on the N.W.O by none other than the Rock at No Way Out which is absolutely priceless.

The DVD is jam packed with extras including video packages and promos from the N.W.O. The best thing though in the Extras section is the entire matches they have from the WCW back catalogue which were never put out for general release in the UK. These matches include the 6 man tag at Bash at the Beach 96 and one of the infamous War Games battles between the N.W.O and the four horsemen as well as others.

This DVD is the ultimate collectors item for those hardcore N.W.O fans which is a must have. Saying that though it is the perfect DVD for the new fans to the N.W.O who didn’t know about their run in WCW as it simplifies the very complicated story. So whether you have been following N.W.O from the start or just from the WWE days this is the perfect item to have.

This release is the best thing to come out of the WWE’s purchase of WCW in my opinion. As it is only with the purchase, that this DVD would have been possible and it is what fans have wanted for some time. I hope this is only the start of releases featuring WCW back catalogue as if they are half as good as this they will be well worth watching. This is now my favourite DVD in my collection and I recommend it to everyone.