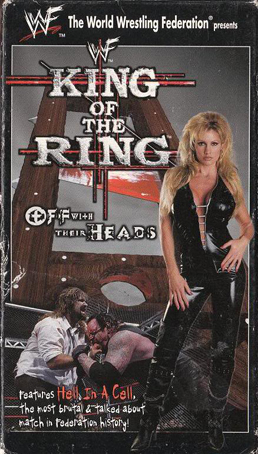 In WWF history the winner of the King of the Ring has almost certainly been propelled into main event status and went on to better things within the WWF (except for Billy Gunn & Mable). This years King of the Ring would feature the semi-finals, and finals of the tournament in which The Rock, Ken Shamrock, Dan ‘The Beast’ Severn & Jeff Jarrett would all compete for the crown of being King of the Ring 1998.

The main event of the night would feature Stone Cold Steve Austin vs. Kane for the WWF title, the match would be a first blood match, but it would have a special stipulation, if Kane lost he would set himself on fire. The PPV was set, and on paper the night looked pretty good.

The PPV was full of good and bad points, obviously the Hell in a Cell match was huge, and was extremely popular with the fans. The PPV did have more to it than just that one single match, many people overlook the other matches on this PPV card, and they just concentrate on the Hell in a Cell match, I am going to look at the PPV in its entirety.

The first match was the 6-man tag team, which involved The Headbangers & Taka, vs. Kaientai. This match was ok as an opening match, it did its job and grabbed the crowds attention and got them ready for the up and coming PPV. The match did actually have some great wrestling moves in, mainly from Taka, and the members of Kaientai. Now as good as this match was, I think that if Vince had put Taka and Funaki in a singles match then it would have been a lot better. However it was good and pretty entertaining.

Next up Sable comes down to the rings, and introduces Vince McMahon to the ring. McMahon comes down to the ring with Brisco & Patterson. A little skit with Patterson getting slapped after he touches Sable up. Then McMahon gets on the mic and starts disrespecting the crowd by calling them disappointing, the crowd are all over him, and he starts yapping on about the ‘lousy DNA syndrome’ . All in all this little segment is just trying to get heat on McMahon.

On with the matches, and the next match features ‘Double J’ vs. Ken Shamrock in a Semi final King of the Ring match. This match on paper looked to be perfectly sound, with both men possessing a great amount of wrestling talent. The match was no disappointment; it was a perfect display of both wrestling abilities. Jarrett showed his great basics as a performer and Shamrock showed his great wrestling skills. The match was great and the winner deserved to win and advance to the final of the tournament.

This next match was a pretty boring one really, The Rock faced off with Dan Severn in a King of the Ring Semi Final. The Beast came down to the ring in a very exciting T-Shirt, which really summed up the whole match. Lets face it, the UFC superstar didn’t really belong in the WWF, he had about as much charisma as a wet sponge, in fact the sponge probably has more charisma then Severn. Anyways The Rock tried his best to take Severn to a half decent performance, and to be honest he did. With some interference from the Nation, the match came to an end. Both men have huge qualities, but they are very different, The Rock is an entertainer, and Severn is a fighter, not an entertainer. The Rock belongs in the WWF, but Severn belongs in the Octagon.

The next match featured Al Snow & Head vs. Too Much, with Jerry Lawler as special guest referee. This match was extremely funny, in the weeks leading up to this match Al Snow had been trying to get a job with the WWF again, he came to the TV Shows in many different costumes trying to get a job with in the WWF. The actual match was funny, it was more like 3 on 1 Handicap match as Too Much & Lawler fought against Snow. The actual wrestling that featured in the match was pretty decent, Al Snow is a great performer and he is pretty funny, this match showed shades of his wrestling ability and a lot of his comedic persona. Too Much were performing pretty well in the match, some good moves and good working as a team. Overall the match was lots of fun and it did have some good wrestling in, especially when Head was in the ring.

The late Owen Hart was in action against X-Pac next. The fellow DX member Chyna accompanied X-Pac to the ring, and as you can imagine she played a role in the outcome of the match. This match was good, as you could always expect from Owen Hart he performed to the highest-level possible, he even took X-Pac to a good match. To be honest with you, X-Pac performed in a positive way also, the match was relatively fast paced with some good wrestling moves on the behalf of Owen Hart and some good high-risk moves from X-Pac. The match would have been technically better if it had lasted slightly longer, however with interference from Mark Henry and Chyna the match came to an end. Overall pretty good match, it was not the best match of all time for Owen Hart, but it was entertaining to a certain degree.

Next up Paul Bearer came out to build up the First Blood match, and to get some heat on himself and Kane. Following this the WWF Tag Team Championships would be on the line as The New Age Out Laws took on the NWA Tag Team Champions, The New Midnight Express. It was obvious from the start that this match was just filling up the PPV, I didn’t like it one bit, as far as I am concerned the only man that showed wrestling ability in that match was Bob Holly. The match was pretty boring and it was just something you could expect from the New Age Out Laws.

Now the big one, the most talked out Hell in a Cell match ever. To be honest with you there’s not much I can really write about this that hasn’t already been written. Both Mankind and Undertaker gave it there all, both men performed at a 100%, and Mick Foley probably performed at over 100%. The match followed a steady, brutal & vicious flow all the way through. It was really hard hitting as the WWF goes, it was very exciting to watch. Undertaker didn’ t really do that much in the match, Foley was the person who took all the risks, Foley was the guy who went off the cell and he was the guy that went through the cell, so all credit goes to Foley. Although I already knew what had happened when I got this video, I was still sat in awe as Foley was thrown from the cell to the announce table, it was truly amazing. To quote from the words of JR, ‘It looked like a car wreak’ . The match was brutal, it was even more brutal when it started again and Foley continued to battle with the Deadman, then Foley was choke slammed through the cell, that was truly amazing for him to risk his body as he did, although that match was more or less a series of two stunts performed by Foley, it was still pretty amazing. I think the best way to sum up this match is to sum it up in one word, that word being BRUTAL.

The main event followed with Kane vs. Austin for the WWF Championship, It was a pretty good match and both Austin and Kane wrestled well. It could not in no way, shape or form follow up to the match that had took place previously between Mankind and Undertaker, but both superstars tried their best. The Hell in a Cell was brought down and both superstars tried to use the steel construction to make the blood flow out of their opponent. The match went out side the ring and the superstars battled with each other. Then unbelievably Mankind came down to assist Kane, only to be met with a Stone Cold Stunner by Austin, The Undertaker came down and clocked Austin with a steel chair and Austin was busted open, the ref saw the blood and claimed Kane the winner of the match. Overall this was a good match, as main events good it was not bad, however it could not have topped the Hell in a Cell match but that was expected. This would be the first time Austin lost the WWF world title, but I think he lost the belt to a valid opponent.

You won’t need much persuasion However if you are looking at it as a PPV overall, it is not bad, ok it is not a great PPV but it has its good points, The Austin/Kane match is good, and the other mid card matches are enjoyable. As you would expect my favourite match was Undertaker/Mankind, it was just amazing. If you buy this you will almost certainly enjoy it as much as I did.