It could be possibility known as the most popular and most talked about feud of the last decade, it was the most bitter rivalry that sports-entertainment had seen in many, many years. Stone Cold Steve Austin vs. Vince McMahon would be the revolutionary feud behind the major success of the WWE. This is the story of two huge egos, which made the WWE hugely successful in the late 1990’s. 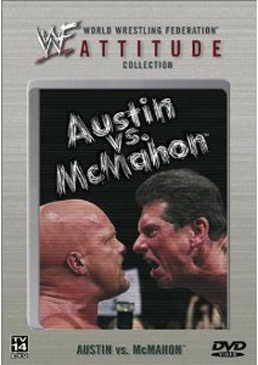 The Austin vs. McMahon video is being re-released on DVD as part of the WWE Attitude Era collection. The release could not have come at a better time, with the well documented events of the past months concerning Austin and the WWE, however this video/DVD focus mainly on the events which have happened on screen as part of a WWE Storyline from 1997 to 1999, the early days of the Attitude Era.

The Video/DVD has all the battles which Austin & McMahon were involved in, from battles with Dude Love, Kane & Undertaker, to the time when Austin was arrested and the time when McMahon supposedly urinated himself in the ring, plus much more, in fact it has everything from the late 1990’s which Austin & McMahon were involved in.

The video/DVD kicks off with some background information of the two characters. Firstly it looks at the fact that Vince McMahon is the owner of the WWE, and how he developed the company from a small time regional company, to a Global empire it is today. It looks at the character of Steve Austin, and the trials and tribulations he had in his early career, but it only looks at these facts very, very briefly.

Kerwin Silfies a TV director of the WWE talks about how the Steve Austin character developed, and how the ‘no-nonsense’ Stone Cold Steve Austin defied the WWE office, in the sense that he done what he wanted to do, and not what the WWE production team wanted him to do. We are then thrown back to WWE In Your House: D-Generation X, when Austin drove a pick-up truck to the ring, and he used it like never before seen in the WWE. We now see a classic McMahon/Austin confrontation which occurred the RAW after the aforementioned PPV, basically typical McMahon/Austin moment.

The next segment is the Raw following Wrestlemania 14, and the presentation of the new WWE World title to Austin from McMahon; again this is another classic moment from the Austin/McMahon saga. The video/DVD continues with even more great Austin/McMahon moments, which are extremely entertaining.

Next up is the RAW in which Steve Austin challenged McMahon to a match, which culminated in a match later on in the broadcast in which Austin would fight McMahon with one arm tied behind his back. As history was made, his formed Tag Team Championship partner Dude Love then turns on Austin, which is the beginning of the Dude Love vs. Austin feud. The video/DVD goes to Greensboro. NC, for the 1998, In Your House: Unforgiven PPV, in which Austin fought Dude Love with McMahon at ringside. At this time the WWE were trying to imply that McMahon was going to ‘screw’ Austin out of the title as he did to Bret Hart at Survivor Series 1997. Clips of the match were shown in which Austin smacked McMahon over the cranium with a steel chair, and he then went on to win the match. As the Dude Love vs. Austin feud continues the Video/DVD looks at how Dude Love fought his best friend Terry Funk, to get another title shot at Austin’s WWE World Championship.

Austin is thrown into a tag team match with Vince McMahon as his tag team partner, when they fight the Nation, with the addition of Dude Love also interfering in the match, Austin is out-numbered once again, particularly when Brisco and Patterson come down to also help with the beat down of Austin. As the Video/DVD depicts the growing battle with Austin against McMahon, Brisco and Patterson, Austin challenges them to a match in which Austin fights both Brisco and Patterson in a handicap match. Austin is winning the match until Dude Love comes down, then a masked man hits Austin with a chair, and then the masked man is exposed as McMahon.

Once again another classic moment from the feud is shown; this time Steve Austin gets Vince McMahon ‘arrested’ for attacking him. The final part of the Austin vs. Dude Love feud happens at In Your House: Over the Edge 1998, when both Austin and Dude Love do battle one more time, with McMahon as special referee. Austin retains the WWE World title once again. This part of the Video/DVD is very good and hugely entertaining. The clips are the best from the feud and it shows some funny, exciting and highly entertaining footage of Austin and Dude Love, great stuff.

As McMahon failed to capture the WWE World title from Austin with the use of Dude Love, he reverts to another WWE Superstar, by the name of Kane. The Video/DVD takes a look at the feud between Kane and Steve Austin. It looks very briefly at the match at the King of the Ring 1998, and we see the events, which lead to Steve Austin losing the WWE World Championship to Kane. Then it shows highlights of the match at the following RAW between Kane and Steve Austin, when Austin wins the WWE World title once again, and the Undertaker is dragged into the feud. We then see how Austin has to defend his WWE Championship against both Undertaker & Kane, at the WWE In Your House: Breakdown PPV, and then goes on to lose his Championship, as Mr. McMahon steals the belt.

Yet again, another classic Austin/McMahon moment, this time, McMahon is about to present the WWE World Championship to either Undertaker or Kane, however the ceremony is interrupted when Steve Austin drives a Ice Machine thing down to the ring and he attacks McMahon. Consequently Austin is arrested and the WWE World Championship is not awarded to either Kane or Undertaker.

I don’t know how many classic Austin/McMahon moments were crammed into this Video/DVD, but this has to be the funniest. McMahon is lying in hospital when Austin dressed as a doctor attacks Vince, beating him with various pieces medical equipment and objects. Following this is another classic moment again, Austin fills one of McMahon’s Cars with cement destroying the car, I have got to say, this is absolutely great stuff, the WWE should learn from past events, it might help the current slump in ratings.

The Video/DVD takes a look at In Your House: Judgement Day PPV, in which Kane fought Undertaker, with referee Steve Austin. As you can imagine it was not plain sailing, and Austin awarded himself the winner of the match, and subsequently McMahon fired Austin. This segment is very good, and it probably had the best material in Kane’s professional career so far. The highlights of this segment of the story were very good, and interesting, maybe it could have been looked at slightly better, however it was funny and did have a lot of classic Austin/McMahon moments.

Looking very briefly at the next and again very funny moment in the Video/DVD, Austin kidnaps McMahon and tortures him. He then takes him down to the ring and pulls a gun out on McMahon, following this McMahon reportedly ‘urinates’ himself in front of the world, as Austin reveals that the gun was a toy, and McMahon is given a legal binding document which lets Austin return and have a WWE Championship match against The Rock.

Austin vs. The Corporation

The Video/DVD now takes a look at the most intense part of the Austin vs. McMahon dispute, Austin vs. The Corporation. To begin with we see how Austin was thrown into the Royal Rumble 1999 so he could become the Number One contender for the WWE Championship. We are shown various highlights from the Royal Rumble 1999, and we see how Austin was robbed out of winning the Royal Rumble, and then we are showed the aftermath in which Austin challenges McMahon to a steel cage match at WWE St. Valentines Day Massacre. Again we are showed highlights of the main match, and we see how The Big Show misguidedly helps Austin win the Cage match.

We now look at the build up to Wrestlemania 15, in which McMahon was determined not to let Austin win the title from his Corporate Champion. Lots of highlights are shown from various RAW broadcasts, although none more unforgettable than Austin driving the beer truck to the ring and drowning McMahon and The Rock in the ring with the beer, once again another Austin/McMahon classic moment. We now are shown highlights of Wrestlemania 15, Austin wins the WWE World Title and he gets one over on McMahon.

The final chapter in this saga so far occurs next; the Video/DVD looks at Austin vs. McMahon and the Ministry. McMahon reveals himself as the ‘Higher Power’, and then Linda McMahon then makes Austin CEO of WWE. We see various highlights, and a rather funny video package of when Austin is in WWE Offices in Stamford. We then see some clips of the King of the Ring PPV, and how Austin was robbed of the CEO position when the brief case was moved higher up during the ladder match. Finally we see Austin vs. The Undertaker at Fully Loaded 1999, again it is looked at very briefly and we see how McMahon leaves the WWE, as The Undertaker lost the match.  This is another good part of the. Austin/McMahon feud; it is full of complex storylines and entertaining events. The package is compiled very well, and it represents the actual events very well.

Being a huge Stone Cold fan this video was very entertaining. It had most of Steve Austin’s best stuff, lots of comical moments and interesting storylines. However, the WWE must have though we were all born yesterday when they made this, WWE made this Video/DVD thinking that every fan would actually believe that Austin & McMahon hated each other, please WWE give us a little credit. Please do not be mistaking, this is not a shoot interview, this is not like ‘Wrestling with Shadows’ with Bret Hart, this is a total ‘work’ product, however it is a highly enjoyable ‘work’ product even if your not a fan of Mr. Austin. Austin vs. McMahon the most enjoyable feud of the late 1990s is represented very well; this video looks at it all the major McMahon/Austin events from 1997 to 1999.  Although after events of the past few months, I’m sure they will be a squeal to Austin vs. McMahon.

No extra events for the DVD this time, but that reflects in the price, and I must say who needs extra events when you got a top quality Video/DVD.