WWF Action, a collection of the most memorable matches and moments in the first half of the year 2001. Whether it is Stone Cold Steve Austin or Trish Stratus your after, this video/dvd certainly has all the best action from the first half of 2001. This instalment of the WWF, covers the events from, Stone Cold Steve Austin turning heel at Wrestlemania 17, The Vince McMahon and Trish Stratus love affair and of course the Spike Dudley and Molly Holly ‘Romeo and Juillette’ love affair, plus lots more. 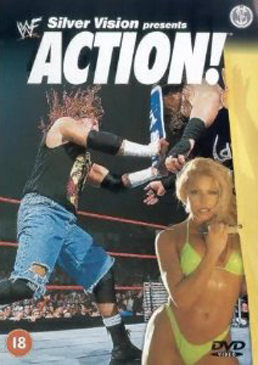 This instalment is divided up into some top chapters, which feature all kinds off crazy WWF antics. Including Perry Saturn, Trish Stratus, Steve Austin, The ‘Alliance’ and many more. The best way to describe this, is too give you the chapter titles, then a brief description:

Hardcore Action. The WWF really did become Hardcore in the first few months of 2001, with the Big Show in the race for the WWF title and the inclusion of Rhyno the WWF Hardcore league would certainly have a lot more Hardcore Action! The chapter starts with a match with Big Show VS Rhyno from RAW, and carries on with various matches and moments from the hardcore division in 2001.

Under Where? This chapter showcases all the women of the WWF and some of the matches they have had in the first part of 2001. Surprisingly it doesn’t really look at Chyna much but looks at Trish, Lita and Molly Holly. With Trish VS Terri in a Bra & Panties match, along with Trish VS Ivory. Also it looks at the actions of Stephanie McMahon, and the matches she had, its ok.

One…Two…Many. This has to be the funniest chapter of all; it follows the action of one-man, a mop and some knockout catch phrases. Perry Saturn took one too many bumps on his head, subsequently he started to go crazy, this follows the story of Perry and his relationship with Terri, and his love for Moppy.

Stratus-faction. Trish Stratus was probably the biggest star of the women’s division in the first half of the year. Her on-screen work with Mr McMahon was great, and her wrestling ability in the ring has improved vastly. This chapter looks at her antics, in and around the Mr McMahon love affair. The Kiss, the Bucket incident and Wrestlemania 17, this chapter has it all.

Love Birds. Spike Dudley and Molly Holly, the unlikely couple, this chapter showcases their quest to be together. Their ‘Romeo and Juillette’ style love affair is one that the WWF has put together in this chapter. With opposition from Hardcore Holly & Crash (behalf of Molly) and the Dudley Boyz (behalf of the Spike). The relationship was put under immenseness pressure; this chapter follows the struggle for love.

Turn….Turn….Turn. This chapter is all about the man that is probably had one of the biggest years in his Pro-Wrestling career, Stone Cold Steve Austin. This chapter looks at how he turned on the fans of the WWF, and “sold his soul to the devil”, by joining up with the WWF Chairman Vince McMahon. It looks at his actions at Wrestlemania 17, and then moves on to the after-math. When he beats up Jim Ross, and when he team with HHH, then later Kurt Angle. This chapter is all about Stone Cold and his heel turn of 2001.

“I’m Up…I’m Down” Vince McMahon is the owner of the WWF, and probably one of the greatest characters of 2001.This chapter looks at how his life was turned up side down in 2001, by various things, including his wife Linda and Stone Cold Steve Austin.

Invasion! This chapter is all about the WCW/ECW invasion. It follows from when Shane McMahon bought the WCW company to right up too the Invasion PPV. With Booker T, RVD & Stephanie McMahon this chapter features early Invasion matches and events.

Firstly my first bad point of WWF Action is the poor coverage of the WWF Hardcore division. It does not showcase the best Hardcore matches of 2001; it only looks at The Big Show, Test, Rhyno and a few others. I personally think that the best Hardcore match of 2001, was Raven VS Rhyno at Backlash 2001, but guess what? No sign of that match in the Video/DVD.

The ‘Under-Where?’ chapter is also pretty dismal for this Video/DVD. It has some good points, but not that many, with just plain action from the women of the WWF. I personally would have preferred this WWF instalment to be much more, Action packed with wrestling not women, although they could be included in.

I will be honest, this is not that bad as far as WWF Products go, but a aspect, which I did not like, was the Over-coverage of Trish Stratus. I know it seems pretty strange, because, how can anyone have too much Trish? But I found this product was just to full of women, who could not wrestle, Trish could, but with too much coverage of her I thought the product was slightly poor.

Finally a good point, well it is more of a funny point in the product but the Perry Saturn angle will make you laugh your socks off. There is no doubt that the Perry Saturn’s ‘Crazy’ gimmick was great, and this product highlights it! I will give this chapter full-marks.

This product was not too bad at all. I enjoyed watching it, and it was pretty humorous, it did lack the ‘Action!’ that the titled promised but it made up for it in humour. If you have seen most of 2001 Wrestling, then you don’t really need to buy this, unless you want to recap, if you missed some WWF TV, then this could be the perfect Christmas Present.

Great set of DVD Extras; look out for the Booker T VS. Kurt Angle match it was very good, also the Steel Cage match.