After a delay of some months, WrestleMania X8 for the Nintendo GameCube finally hit the shelves of the UK games stores last week. Made by THQ and Yuke’s, the game would be one of the first video game titles to be marketed with the WWE brand name, and it would be the first WWE game to be released on Nintendo’s GameCube. Would this game make a triumphant debut on Nintendo’s GameCube? Or would it be mighty disaster for the WWE and Nintendo relationship? 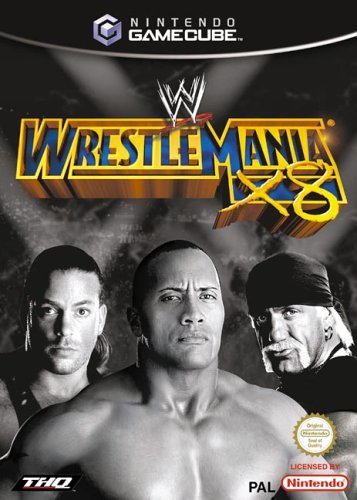 Well, I had really been looking forward to this game so much, with a roster full of some fresh faces  & old friends, graphics that looked almost too good to be true, and the thought, just the thought, that this game might be like the almighty No Mercy, well, it had me jumping for joy. When I found out the game was to be released a month early, well, you can imagine my reaction, I was over the moon, the thought of finally getting to recreate the Hollywood Hulk Hogan vs. The Rock match from WM X8 had me rushing out to pre-order my copy, just in case the game sold out. Yeah, that’s right, I got my copy of the game, and here is the low down. 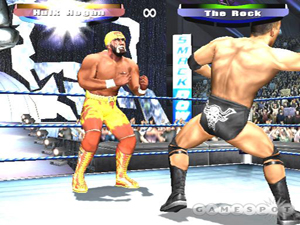 Got to be the best part of the game. The graphics are far superior then any WWE game I have ever played. The blocky-ness of past WWF games on the Nintendo consoles has been replaced with slick, smooth and realistic graphics. Each WWE superstar looks like their real-life counterpart, whether it be the mighty Hulk Hogan, or the electrifying Rock, you will find it a hard task to separate the actual superstar, from his or her GameCube counterpart. The facial expressions on the superstars are great, if the grappler you are using has been put in a submission move, you can see the pain on his or her face. The movement of each WWE superstar is spot on, from the Ric Flair strut, to the Hogan ear cup, its all good. The arenas look realistic, and have all the detail, with the lighting and pyrotechnics when a WWE superstar make they’re way to the ring. The only struggling part about the graphics is the crowd, they look too flat, and cardboard like, it sticks out like a sore thumb, on a game which other wise has untouchable graphics.

The most notable problem with the sound on this game is the lack of it, or more accurately, the lack or theme music for certain wrestlers. Booker T, The Hardyz, and many more WWE superstars have had their theme music replaced with a replacement tune, some of which are made to sound similar to the original theme tunes, others that are far from being accurate. The quality of the sound is good, on past Nintendo titles; I have always felt that the sound lacked something, that’s not the case in this game. The sound quality is very accurate, with wrestler’s theme tunes being very clear. The sound during the game play is also good, the crashing onto the mat and shaking of steel cages all sound nice. This game features no Play-by-Play commentary, which for me is a good thing because I always end up turning it off because it annoys me so much, however, if you like the TV-Style commentary you will be a bit disappointed, but remember, there is only so much of Michael Cole we can take. This is a good improvement from past Nintendo titles, however if you are used to the Smackdown series it will only be what you are accustomed to. 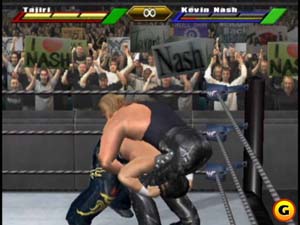 For me, the gameplay is the biggest disappointment, when I picked up the controller and had my first match; my heart sank deep down to the bottom of my stomach. I had one match, and already I was depressed. I wanted No Mercy style, and what I got was something very different. Each grappler has striking moves, front-grappling moves, and back grappling moves, submission moves and a special move or two. In one match, you find yourself repeating the same moves over and over again. I do think its far superior to the Smackdown games, as well as being slower and rather smoother. Compared to No Mercy it’s faster and a lot limited. I do however like the fact that finishing moves can be reversed as well as most of the other moves. I will admit, I did get used to the game as I played it more, and it did get better, its far from the realms of No Mercy, however, with some patience and persistence you will master the game, you never know, you might actually like it. It’s a blend of Smackdown and No Mercy rolled into one, I suppose its like Marmite, you either love it, or hate it, and I like the odd spot of Marmite, so it suits me well.

Not the main selling point of the game, however what it has got, it offers it well. Firstly you have Exhibition mode, you can have the usual Singles, Hardcore, Cage, Hell in a Cell and the rest of the standard modes we all have come to expect. There is a lack in the ‘gimmick’ matches department, there is Royal Rumble, Ladder, TLC, Cage, Table and Hell in a Cell, but that’s it, if you want all the gimmick matches, I advise you to stick with the Smackdown titles. I love the table matches, people can be put through the tables in any way, and they are really realistic. Ladders matches again are very good, but the Hell in a Cell, what a match, first time a full size cell has been used in a game, and in fact it is great, much better than previous games with the Hell in a Cell included. Royal Rumble matches are also available, and I don’t know whether its just me, but the Royal Rumble matches are extremely hard, I can’t even get past the first few people, whoops, I probably should not have admitted to that, but anyway, it’s a great way to have fun. The game is lacking is one major department, that’s the career mode, or story mode; there is none of that in this game. No storylines, no career, no backstage skits, nothing, just Path of a Champion. Ever played on WCW Revenge, if you have then you know what it is, if you haven’t, listen very carefully, I will say this only once, Path of a Champion is a mode, in which you select which belt you wish to go after, then you have various matches until you get a championship match, in which you are able to capture the title and win one of the hidden superstars. The game offers another mode called Battle for the Belts, a mode in which you select a customized belt, save it onto memory card, and then battle with your friends in a title match.

Very limited and poor, for a game of this standard and calibre, the CAW mode really is poor. The CAW features a small amount of faces, which you can only change the eye and skin colour. You can add hairstyles and facial hair, but you can’t customize. The ring attire again is very limited, with a few shirts, vests, and pants it leaves a lot of room for improvement. You can however customize move sets, and a particular part I like is you can customize parts of your wrestlers entrance. Overall the CAW mode is poor, however, if you wish to create Bret Hart, Billy, Chuck, Stevie Richards and some other wrestling superstars you can easily create them as they have their taunts, features and attire in the game. There is an option where you can edit the existing wrestlers, but that only applies to the moves sets, you cannot edit the appearance of the wrestlers, which is poor, because you can’t update them, for example, put Hollywood Hulk Hogan into the good old red and yellow. 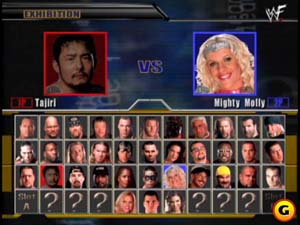 In the USA WM X8 was released in June, so the roster then was pretty up to date, but it still was missing some noticeable names. Now in September, the roster seems to be even more out of date. Don’t get me wrong, it still has the likes of Booker T, RVD, Hurricane, Lance Storm, as well as The Rock, Triple H, Steve Austin and such like. The game offers a variety of people, from Shane McMahon to The Hurricane, and even has the New World Order in, well Hollywood Hulk Hogan, Kevin Nash and Scott Hall, even though they the group no longer exists. The roster has some faces missing, some superstars that are not worth putting in and some new faces that haven’t had a chance to be put into the game. The roster the game offers is the most up to date you will find at the moment, and you can certainly have some fun. The game does have Scott Hall even though he is no longer under WWE contract, and the game also has Stone Cold in, but he was taken off the UK and European box art due to obvious reasons. Unlike the Smackdown games, this game gives you the chance to change the wrestler costumes, each wrestler has two sets of ring attire, for instance Stone Cold’s attire is his usual black trunk number, and his secondary attire is his “What?” t-shirt and jeans. All in all not a bad selection, as long as Hogan and Flair were in the game I wasn’t bothered.

When you first get the game, there is a lot to do, mess around with the matches, win all the secret wrestlers and unlock the hidden arenas. Once you have won everything, then they may seem like the game needs to be traded in at your local games store, well you won’t be doing that, well not for a while anyway. The game has a great exhibition mode, and you will keep coming back for some time, get your mates around and you will have a ball. Although the game may seem to lack in incentives to come back, it certainly will keep me going, even if it just is just to win a Royal Rumble. Overall you may eventually get tired of this game, but it should always be a good laugh when you get some mates around, even if they don’t like wrestling.

I like the game, at first I was disappointed, but when I got into the game I started to enjoy it. It has excellent graphics, good quality of sound, not bad game play and the most up to date roster around. The game does have its bad points, but the good points out weight the bad, by far. One thing I have got to say before anyone should get this game, don’t expect it to be like No Mercy, I discovered that, take this game for what it is, its fun, entertaining and well worth the money, but it certainly is not No Mercy. The game has had some bad reviews by the wrestling community, I for think that the game is very good, and it is essential for any GameCube owner who is a WWE fan. The game does lack a little depth, but that aside, I’m sure anyone who buys the game, will enjoy, even as much as I did. If you are thinking about buying a GameCube to play WM X8 on, I say Stop! Its good but not that good wait till Smackdown: SYM is out later this year.