There was a time in Pro-Wrestling when Vince McMahon never ruled the world, when there was no scantly-clad women, no foul language and the magic of Pro-Wrestling was still real. This magical time has been re-created by the people at Acclaim, and now Legends of Wrestling is upon us. A few months back, I read about the new wrestling game being produced by Acclaim, as first I had a horrible shiver down my back, the thought of a re-incarnation of WWF Warzone or Attitude, it would have been dire to say the least. 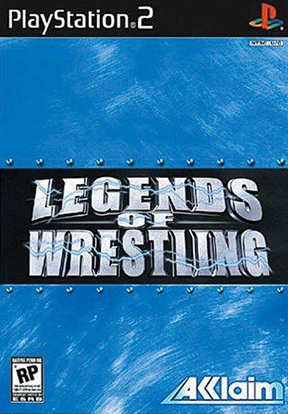 But now we are speedily approaching the release of Legends of Wrestling, so what will it be like? Another Warzone and Attitude? Or a new & fresh product that will be enjoyable to play, and not a chore. Well this report should tell you all the facts about Legends of Wrestling, and will this game truly reflect the greatness of the superstars that are featured in the game? Find out!

So Legends of Wrestling, it is a term, which tends to be used extremely loosely around the Pro-Wrestling business. This game does in fact feature some of the biggest names in Pro-Wrestling, from the ‘Golden Days’ to the modern day. We see stars like RVD wrestle along side The Dynamite Kid, and other great innovators of Pro-Wrestling. But the leading grappler in this game has got to be, the Legend, Hulk Hogan. Just when you thought you had seen the last of the ‘Immortal one’, The ‘Mania’ arrives back in the world of Pro-Wrestling. In my personal opinion, Hogan is the only man that can be the leading figure in this game, he revolutionised Pro-Wrestling, and he is making an impact with Legends of Wrestling. But saying this, the Red & Yellow, American Hero is not the only legend that this game features. The game features a variety of top grapplers from around the Pro-Wrestling scene; there is Bret Hart, Sabu, Ricky ‘Dragon’ Steamboat, RVD and many more. Here is a look at the full list of legends the game features.

These are the top-wrestling superstars that are featured in the game, but we also have a list of those who are secret wrestlers

So there the top wrestlers that feature in the game, its time to find out what they do. Each wrestler has 66 moves; this includes 4 taunts, which give the wrestler character. The moves are specially designed for each superstar and have signature moves, so don’t worry Hogan’s got the leg drop and Bret Hart the Sharp Shooter. Also each star has moves, which can be unlocked in season mode and can be used for either your wrestler or a custom wrestler. Another feature for each wrestling star is the use of ability points. Each legend has 10 abilities, which include Brawling, Pinning, Technical, High Risk, Ground, Corner, Hardcore, Grappling, Charging, and Cheating. All these abilities are rated on a 3-point system, so it is less complex than the Smackdown games, and much more detailed than WWF Warzone or Attitude.

In wrestling games, a key feature is creating your own Grappler. Well Legends of Wrestling has its Create-a-Wrestler mode. The mode seems to be like the average CAW mode on any wrestling game. There is lot to choose from, such as vest, jackets and the usual stuff. You can alter the body frame, skin colour and the set the facial features. But you can’t alter the features, like change the colours of eyes or lips, just use the standard features. It’s the same with the clothes, you can’t really altar the clothes that much only to a limited point.

The game features a variety of arena’s, which are in different regions. Before the McMahon Empire consumed every thing to do with Wrestling, it all used to be reginolised, in which each region would have its own champion. Legends of Wrestling features the Midwest, North East, South East, South West, Pacific and World arena. Also there is a Beach, Backlot, Gymnasium and Iguana arena. All these venues are fully detailed with weapons, crowd and video screen. It provides a great wrestling atmosphere, which can’t be found in any other wrestling game. 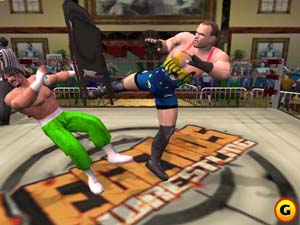 In my personal opinion the best feature of the game, is the crowd response to the wrestlers. Your quest in the game is not only too win a match but gain popularity. You gain your popularity by performing your taunts, and pleasing the crowd. You have control of the taunts that your wrestler does, on the way to the ring. He can do all types of taunts. The Hulk Hogan flexing of the muscles, or slapping the hands of your fans with a high-five. The more you do, the more popularity you gain, and therefore the more successful you will be in the season mode.

The game has a few features but not excessive amounts as some wrestling games do. It has a Single, Tag and 3-way matches, plus Special Referee matches. Also you can have tag and single tournaments. The lack of game and match types is down too a simple point, the game is set before the WWF. Before tables matches, Hardcore matches, Hell in a Cell and all the other matches the WWF popularised.

In every wrestling game the most important aspect is the career or season mode. This mode gives the player the ability to play the role of a wrestler and win world title after world title. However, Legends of Wrestling is a little different, you still have to work your way up too the glory of world champion. Legends of wrestling season mode are different because you start of as a no one, a unknown wrestler. As you are not known you must a build a basis of popularity across the world. You must fight across the USA in the various regions and fight for the championship, when you have acquired every regional belt you must defend your title. This seems to be an interesting point, because although winning belts, you must maintain the fan popularity and become world famous in Pro-Wrestling. If you fail to maintain fan popularity then you will eventually lose your belts. The pinnacle of your career mode comes when you must fight Bret Hart for the World title, but you must earn this match. After each match you get points for various categories the more points you earn the more successful you will be. You are not alone in your quest for ultimate glory; you have a manager, either Captain Lou Albano or Jimmy ‘Mouth of the South’ Hart. These managers will give you match analysis’, but will also provide help, by doing various thing in the matches to help you win the world title. You will encounter some of the greats in your quest for the world title, Hogan, Bret Hart Terry Funk & more, but you have to prove that you are a true Legend of Wrestling. 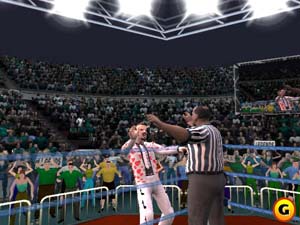 Now the Game play, we all known Acclaim have not been well known for there great in-ring performance in wrestling games, the old Acclaim WWF & ECW titles were very poor quality. But now, it looks like they have hit the ‘jack-pot’ with Legends of Wrestling. The game is faster, but also more detailed in the way the moves are performed. There is less buttons you need to press to perform moves, instead of punching the buttons on the control pad it is a lot more easier to play the game. The game feature a special feature which is called the ISP or Intermediate Start Position, which is a complex system that helps create a sequence of moves. Each superstar has a different ISP, and depending on the buttons you press you perform a different set of moves, which varies in the damage you inflict. So the game play is much better, much smoother and clearer. With a much more powerful game engine Acclaim have developed a better game, and the PS2 and the X-Box, will both help this game perform to the highest standard possible. 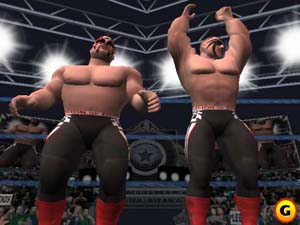 The graphics of the games are quite different than previous Acclaim wrestling games. In my estimation Acclaim have not tried really to make the character look like their real-life counter part, which is actually the best possible thing they could have done. With Warzone and Attitude Acclaim spent far too much time on characters details and less on actual moves and gameplay. Legends of Wrestling has a cartoonist look about it, and the wrestlers are big and bulky which kinds of makes the game play better. I mean Hulk Hogan’s pythons were big, but never that big. The game is a vast improvement on the previous Acclaim games, even if the wrestlers don’t look identical to the video game counterpart.

Legends of Wrestling, this is a great game. It takes you back to nostalgic time, when everything you saw in that ring was meant to be real, when Hulk Hogan done ‘the training, the Praying and took the vitamins, Brother!” The magic of Pro-Wrestling was real, the wrestling stars could more often that not, actually wrestle, and fame and glory was earned. Legends of wrestling will create and escapism for the modern-day wrestling world. The game has good game play, decent graphics and will be a load of fun, I will be getting the game, and the ‘Mania’ will return once again.