I have finally decided to do another review, two reviews in a year isn’t that bad is it? Anyway, since Russ, the “Games Guru” decided he couldn’t play this game without having the urge to throw his Playstation 2 out the window, I’ll take care of this one. This one of course referring to “Legends” of Wrestling II. 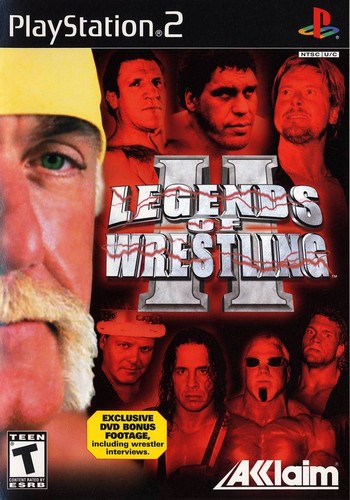 I bet I’m not the only one to question the title, people may think this is a “Who’s Who” of wrestling but it’s more a “Who’s that”, ah the oldies are the goodies. Of course you’ll know many of the guys here but I do question ‘Hacksaw’ Jim Duggan and Legend being used in the same sentence. Although through the game I found out he stole the WCW TV Title. No good janitor.

Anyway, I know that last time I formatted the review in sections but I thought I’d spice it up. I give information on the game THEN give the scores. Isn’t that crazy?

Well, from Legends of Wrestling 1, the graphics have had a slight change. They still seem too cartoon like for me but you can sometimes tell whom the wrestler is this time. I know that Acclaim isn’t famed for their good graphics, or games for that matter, but they really could do with a touch up. It’s best not to compare these sorts of graphics with those of Smackdown: SYM as it’s both unfair and not really worthwhile. They are two different styles, cartoonesque and good and you’d never guess which one I prefer. Anyway, graphic: Nothing Special. Let us move on. 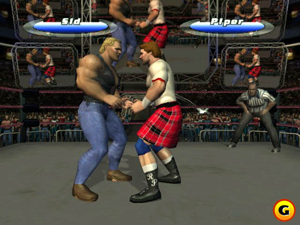 The season mode, famous for making you want to KILL the man who made it has been touched up a bit. You see now you choose a “storyline” for each territory you go. By storyline, I mean you have to listen to badly voiced promoters offering you title shots if you improve. That is EVERY storyline. I was amused by the method of choosing your storyline, it reminded me of Catchphrase for some reason. So did the Gambling for that matter, but I’ll get to that later.

Create a Legend: Eurgh! Arrgghhh! I suppose it’s okay, but when you’re spoiled on SYM this doesn’t really measure up. This is for those of you who don’t like to spend that much time on a created wrestler. Although a nice extra is the list of names that can be announced. Yes, now you can watch as the awesome Brock Diesel makes his way to the ring. You want Scott Nash? You have him! You want Kevin Oz? Wait…I’m not the Kevin Nash obsessive at TWO. One odd thing I did notice was that one of the towns names that wasn’t present was Glasgow, Scotland. I say this is odd as Rowdy Roddy Piper hailed from there, and was announced from there. Maybe I missed it, but, meh.

As I said before, I do question certain members of the roster but it is quite a roster in the game. You have Hulk Hogan, Jerry Lawler, Eddie G, Bret Hart, Owen Hart and countless other people who I semi-know. But honestly has anyone every heard of Baron Von Rasche? For that matter can anyone spell his last name without looking it up? Anyway, if you like living in the past, if you cheered Hulk Hogan at WM X-8 not only should you be kicked in the nuts but also this roster is for you! Yay Nostalgia! 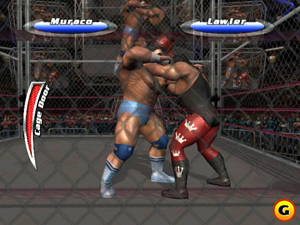 Finally, the Gameplay and the Music. The two most important factors? Well, gameplay is anyway. What can I say about it? It plays exactly the same as LoW I, The B. Ware Stunner? It’s still there. Flyin’ Brain’s Pedigree? Yup! Come on Acclaim, can we at least be a little realistic? As for the music, it was all composed by Jimmy Hart. The announcer in the game is former WCW announcer Dave Penzer. In other words, it’s WCW Bay-ba

There are some extremely good extras in the game with interviews with some of the Legends. I’d say there was about 20 3 minute interviews in there. There is also a load to unlock here, which you can unlock via the coins you earn. So far I have only managed to earn Green coins (The worst kind) and had to Gamble for the rest. This is of course no problem as I rule at gambling.

Overall, the game has an enjoyable feel to it but it is probably best for rental. Especially if you have 8 friends and two Multitaps. This game is an eight player which should prove entertaining at the least. This game isn’t for everyone, but if you are a nostalgia fool then I’d advise you to buy this game and cherish it, like it’s your own child.

As I promised here are the scores:

Scoring for Nostalgia Fans:Who cares about scores? I want Andre vs. Hogan! I dreamed about the day that I could play that in video game form. That evil Ted DiBiase, what did he do to Andre? Nothing? Crap!Why must this “Colin” guy mock Jim Duggan? Duggan could whoop his ass! Come on tough guy! Hoooooo! (Seriously Duggan’s was the only interview IN character. It worries me. I wonder if he walks down the streets carrying that 2×4. For that matter I wonder of he still thinks he’s the WCW janitor.)