By KJ
Wrestling Book Reviews
This page contains affiliate links. At no additional cost to you, we may earn a commission if you click through and make a purchase. Learn more

This book is the follow up to Mick’s superb and hugely successful, New York Times bestseller Have a Nice Day. It picks up where Have a Nice Day left off with Mick winning the WWF Title for the first time in late 1998. From there he goes on to talk about his “I Quit” match with The Rock from the 1999 Royal Rumble, the match which was featured on Beyond The Mat. He talks about Beyond The Mat and how Vince was against him publicising the film.

Foley is Good and the Real World is Faker than Wrestling 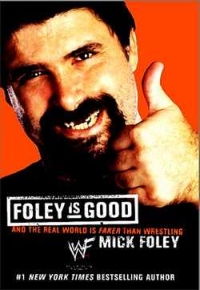 The book continues on through his career, he talks about the Rock and Sock connection and his relationship with The Rock, he also describes his relationship with Vince McMahon, before revealing why he decided to retire from in ring competition. He talks about his Hell in a Cell match at the Royal Rumble 2000 with Triple H and how he had to train intensively to get back into shape for his series with Triple H. He then talks about what he thought would be his last match and how he felt when leaving the arena, then about his surprise at being offered a main event slot at WrestleMania 2000.

That would be all then? Nope, Mick then goes into what he describes as another book in which he talks about the negative press the WWF has received over the past few years, mainly from the PTC. He looks at a study carried out by a Dr. Walter Ganz, who Mick got in touch with and found some very interesting things that make this survey look pretty questionable. Mick also tried to contact the PTC who were unwilling to talk to him. This part of the book is a very interesting read in which Mick, I felt, takes a very un-biased look at the WWF and how it compares with other TV show’s and look’s at the credibility of the PTC and their campaign against WWF TV.

All in all this book is every bit as good as Have a Nice Day, I cant say it’s any better, I’d say it’s on a par. Al Snow is joined in the book by Billy Gunn, Test and the Mean Street Posse, by becoming the butt of Mick’s jokes. I’d recommend this book to all wrestling fans especially the last two chapters which make very interesting reading.