Extreme Warfare Revenge is the latest in the line of EW games, created by Adam Ryland.  Before it’s release in June 2002, there were phenomenal expectations about this game.  It was almost a certainty that it would be an improvement from EWD, the previous game in the series, but would it be able to topple Promotion Wars from the top of the Wrestling Promoter Simulator genre?  This kind of game has been described as wrestling’s answers to Championship Manager, the popular Football Management game for the PC.  However, most Wrestling Promoter Sims can be found for free online, as charging a price for the game would mean that real names and federations would have to be removed, seeing as how THQ have an exclusive licence to make WWE games. So is this game all it was built up to be? 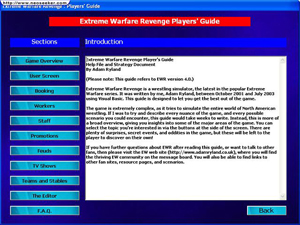 Because of the “Spreadsheet” type layout to the game, EWR’s graphics are not it’s big selling point. The layout of the menus takes the format of a red, white and blue colour scheme, which never causes any problems due to the fact that text clearly stands out from the background.  The loading screens are filled with scantily clad women, wearing outfits so revealing they’d make Kelly Brook faint. Apart from that though, there are no pictures to be found in the game due to copyright issues.

Mind blowing. Industry changing. Revolutionary.  The best in any game to date.  None of these apply to EWR, as there is no sound in the game. Seeing how the game is played on a PC, it would have been a nice touch to add your own MP3s or WAV music files into the game, but alas, it’s not to be.

The game is great fun to play.  You have complete control in EWR, and it’s down to you who to push, who to sign, and who to fire.  You have to try to take your federation to the top of the wrestling world (or keep them there, depending on what promotion you chose to run).  To do this, you have to keep an eye on your finances and TV ratings.  If you go out and hire the biggest names in pro wrestling for your federation straight away, you’ll be lucky to last a month, due to the wages you have to pay.  Instead, you have to start off with wrestlers you can afford, and build them into the new Hulk Hogans or Rocks.  However, people won’t tune into your TV show to see no name wrestlers- they want to see superstars, not rookies.  If your federation is a success, you can choose to run monthly PPVs for extra income.  However, the road to victory is not always smooth.  Real life situations can hinder your progress.  Wrestlers can show up late, turn to drink and drugs, refuse to do the “job” to another wrestler they don’t consider in their league.  You have to manage your roster with care, or you might find yourself in a situation with an angry pool of talent, reluctant to go out and fight for the fans.  Hiring staff to keep your wrestlers in order and do other tasks (E.g.- Medics, production workers, storyline writers) might help your federation, but they won’t work for free.Booking shows is pretty easy, and gives you total control.  The Booking Wizard lets you choose who you want to see in feuds and matches, and lets you decide the outcome.  It’s possible to add interviews and angles to shows, to have a break from all the wrestling.  Backstage brawls, aggressive promos, challenges for PPVs can all be booked with ease. However, the only downside is that it can take a long time to book a show to perfection.  If you have 3 TV shows per week, it’s going to take a lot of time to create the perfect federation. 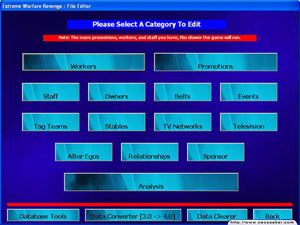 You can do just about everything wrestling related in this game.  TV networks and sponsors will offer you deals, but if your promotion is seen at “extreme” or risky, your sponsors won’t hesitate to pull out of the deal.  You can donate money to charity to raise your public image.  You can choose which belts to use in your federation, and add/delete championships as you see fit.  Nearly everything is editable.  Picking your commentators for each show may seem a simple task, but you have to think carefully.  If you were a wrestling fan, would you watch a show if the commentators were awful?  No, that’s why Kevin Kelly’s Metal does so poor every week. You can even choose what format you want your show report in- Do you pick the brief report of the Scotsman, the cynical approach of Scott Keith, the in-depth “Steve in the 5th row was wearing a blue T shirt” style of CRZ?  It’s down to you, like the one thousand and one other options in EWR.

The editor allows you to edit, delete or add anything to the database.  If you want to add your favourite wrestler, delete a TV station, change your champions or just keep your roster up to date, it’s all possible and easy to do.  No more fiddling about in Notepad to make changes!

The amount of people available to hire is pretty large.  However, if you’re a fan of Mexican, Japanese or British wrestling, you won’t be too happy as only American federations are featured.  However, if you have time, you can add superstars to the game, via the Editor.  Alternatively, there are Updates which can be found all over the internet, so that you can have an up to date game.

This game is beer to your Scott Hall.  After a few plays, all you’ll think about is EWR.  You’ll stop studying hard in school because you’ll be thinking of Pay Per View show names.  You’ll get fired from work for showing up late every day, because you want to see how successful your big Rock Vs Benoit feud is.  If you have a life, say goodbye to it when you download EWR, because your PC will become your only friend in the world.  You will not get bored of this game at all!  Even if you get bored of your WWE game, you still have to go WWA, NWA TNA, bring back ECW, start your own indy fed…The list goes on.

The game might be addictive, but it’s not one hundred percent perfect.  There’s a lack of handicap matches and special referee matches. Sometimes a worker will refuse to work with another wrestler, even although they’re above them on the card. If you don’t have a show every week, you’ll just find yourself pressing the Next Day button over and over.  And conversely, if you have too many shows, it might get a bit repetitive just booking events non-stop.Aside from these minor faults, EWR is a superb game.  It’s 100% legal to download it for free, so there’s nothing to stop you from giving this game a go.  And believe me, it’s worth it just for The Coach’s Dance Of The Day!